Eric W. Cook
A teacher, writer, and musician when not busy being a father and husband.

A real photograph post card of the Worthington Evangelical Lutheran Church, Worthington, PA.  The card is postdated May 9, 1910.  The photo depicts the church as seen from slightly down hill on Worthington's West Main Street.  The exterior of the church has barely changed since the time of this photograph.

This structure is the third home of the congregation.  The church has its origin in a Lutheran Sunday School started by Peter Graff I, in the 1846.  Graff began a village Sunday School in a harness shop located across the street from the current church's location.  In 1847 Graff and others organized the first Lutheran Parish in the area since the failure of an earlier Lutheran Church near Slate Lick. That church seems to have collapsed in the 1820's or 30's.  Graff was a local businessman and entrepreneur who had moved from upstate New York to Pittsburgh and from Pittsburgh to the then village of Buffalo Furnace to reorganize and develop several small industrial concerns.  A devout Lutheran, Graff established the Parish and was it's chief financial and lay spiritual supporter during his life.  The Parish was a member of the General Synod, a branch of American Lutheranism that was evangelical, low church and pro-English language use.  As the Parish grew the members built a simple frame meeting house that served as a village school and as a church.  This structure was replaced in the 1850's by a grander brick church with a steeple and the first church bell in the neighborhood, this structure was located on the same spot as the current church.  It was replaced in the period of 1887-89 with the current structure.

The interior of the church was later remodeled in the early 1950's and substantially remodeled again in 1970/71, and a final and thorough restoration project was launched and completed in stages between 1996 and 2000, one that has greatly enhanced the appearance of the interior of the church and restored many of the 19th century architectural features.  Currently the church is a member of the ELCA, the Evangelical Lutheran Church in America.

The back of this post card carries the following information concerning the Detrich family of Worthington and Kittanning:


Transcription of text:
Mrs C. H. Detrich
420 Highland Ave.
Kittanning . Penna.
Dear Mamma, - Pap is about the same as he was when you left.  We can not see the least bit of difference in him.  I will call you up if we see any change.  Nita [&?] John[s?] did not come down.
Posted by Eric W. Cook at 1:04 PM No comments:

Considering the current bru-ha-ha over health care I thought this non-Armstrong County item might be of interest.  It is a 1939 pass to the gallery of the US Senate. 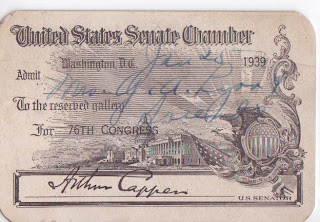 A color photo postcard of St. Paul's Episcopal Church in Kittanning, PA.  The photo was most likely taken in 1913.  The photo shows the newly completed third (and current) church structure. 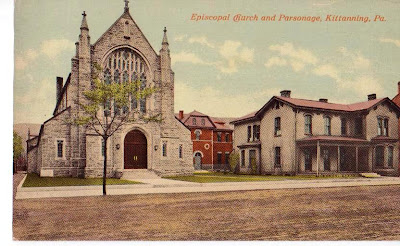 The church in the photo was designed by New York architects Frazer and Robb, and was constructed between 1911 and 1913.  The service was held there on Ash Wednesday of 1913, although the church was not officially dedicated until after the mortgage was paid off, and a few interior details were left unfinished until the early 1930's.  The actual dedication service featured the last act of Bishop Whitehead of Pittsburgh and was held on the feast day of St. Paul, January 22, 1921.

The second church that the current structure replaced was a Victorian brick Gothic-revival church begun in 1868 and remodeled and expanded twice before suffering a fire from a lightening strike in 1910.  Rather than repair the damage, the Vestry (church officers) decided to demolish it and rebuild in a newer and grander style.  The church was re-built in a more authentic English Parish Gothic style and had interior appointments copied from several ancient English churches.  At the time of the building project there was also talk that the Diocese of Pittsburgh, which then comprised all of Western Pennsylvania, would be broken into three separate dioceses and Kittanning would become the seat of the middle diocese and St. Paul's the cathedral church.  This rumored split of the diocese into three did not happened, nonetheless the beautiful church was constructed with all the resources available, including a new 27 rank pipe organ from the Erie firm of Tellers-Sommerhoff.

The house to the immediate right in the post card was the Parsonage that was demolished sometime in the late 1920's.  The structure behind the Parsonage is the Parish House (in red brick).  Built in 1895 the Parish House held a church office, gym, library, combination stage and meeting hall, and three Sunday School classrooms, it also acted as the first YMCA and was used by the Kittanning public schools for various activities until the Lutheran congregation of St. John's located on North Jefferson St. completed their larger and more modern Parish Hall in 1910; at that point those civic and school activities moved there.  St. Paul's Parish House continued to be used by the church until it was heavily remodeled, both in terms of interior layout and appointments and exterior appearance in 1951-55.  Currently the Parish house is covered in a stone facade to match the church and is still used for church offices, classrooms and parish functions.
Posted by Eric W. Cook at 1:39 PM No comments:

This is the last blog post in a series of image scans of the 150th Anniversary booklet, produced in 1948 for Union Baptist Church, Cadogan/Slate Lick, Pennsylvania. The church is often known as Old Union, and is the starting point for the religious history of many Armstrong County families, notably the Claypool(e)'s.

I have scanned all the images from the booklet in reverse order. So while this is the last blog entry, it is the beginning of the book.

This allows you to progress through the book in normal order. The booklet lists no copyright and no publisher.

Some of the individual articles are attributed, others are not. The book has an embossed cardboard wrap (off white/cream with brown printing) for a cover and features 35 numbered pages, one un-numbered page, and an errata slip taped to the inside rear cover.

My thanks to James H. Cook, Jr. for allowing me to reproduce this book from his library.

Inside Cover and Page 1, Title Page